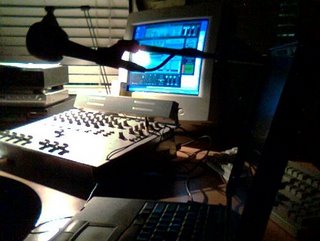 Sorry to break the illusion that we’re broadcasting from a secret tricked out high tech bunker somewhere beneath Stony Batter … but this is pretty much what Beach Radio looks like most of the time. If you look hard enough you might just make out the duct tape that holds the desk together.

Thought I’d chuck my playlist up in case anyone was interested. Of note tonight I thought was a kind of experimental piece (way out of line from my usual faire), by a guy called Mazen Kerbaj who recorded this piece “Starry Night” from the balcony of his flat in Beirut with himself on trumpet and the Israeli airforce providing the bombs! Eerie and quite disturbing; you can grab a copy from the link in the playlist.