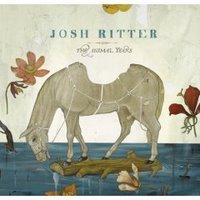 I usually post the playlists for my show over on the Casa de Country Mike blog but I didn’t write the songs down last night as I was recording it for a potential podcast, so figured I’d have another listen and post later. But my highlight for the show last night (apart from Willy B. making me go to dead air to fix the horrible buzz we were experiencing – but big ups to him for fixing it!) had to be the two tracks by Josh Ritter that I played, Good Man and Thin Blue Flame.

Ritter’s “The Animal Years” is a lyrically complex meditation on well … the usual subjects, but it’s Ritter’s rich voice and some awesome production (from a guy who’s produced both Mighty Mouse and Iron & Wine) that make this offering stand above many of the similarly styled singer/songwriterish releases of late. I played the pop sounding Good Man and the 9 minute opus Thin Blue Flame. The opening track, Girl in the War is really what sold the album for me originally and you can download that one and Thin Blue Flame from the Josh Ritter Fansite, here: http://www.dougrice.net/joshritter_audio.html