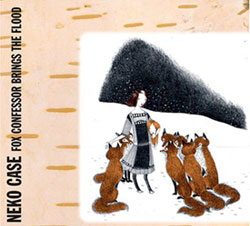 Neko Case’s offerings are getting progressively more refined as well as progressively more cryptic in some respects. Rather than letting her growing alt-country stardom go to her head (ala Ryan Adams), Case appears to be on a solid path of songwriter maturation backed up by collaborations with artists of notable caliber in her ‘solo’ offerings as well as in her side projects like The New Pornographers. “Fox Confessor Brings the Flood” is her latest offering and features such artists as Bloodshot Records artist Kelly Hogan on backup vocals, Howe Gelb formerly of Giant Sand, and tracks with backup bands such as Calexico and the Sadies. This record is an ambitious and lyrically reflective statement by Case, a follow on from her critically aclaimed CD “Blacklisted” from 2002, the CD contains some incredible narrative flourishes from thinly veiled personal insights to deeply metaphorical meditations. I played a couple of tracks this Monday, Star Witness and Hold On, Hold On.

You can download a recent live Neko Case performance from NPR.org here or grab both Hold On, Hold On or the title track Fox Confessor Brings the Flood from this post over on the Aquariam Drunkard Blog.