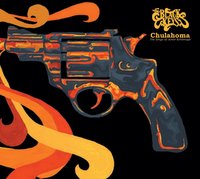 Bob started it all out with the radio equivalent of a treatable neurosis, by playing nearly 3 hours worth of songs with the word ‘radio’ in them. I heard a Monty Python track, “I Bet They Won’t Play this Song on the Radio” which I’d never have expected to ever hear on the radio – but that’s the Beach for you… my pick for the night though was one by the blues unit the Black Keys.

I’ve been playing tracks off this 6 song CD by the Black Keys for a couple of weeks now, but I think that the track I played this monday, My Mind is Ramblin’ is really the one i’m holding on to. It’s a fuzzy hard-picked guitar groove with a hook that the White Stripes can only dream about at night. From a CD called Chulahoma, the Akron, OH two-piece The Black Keys on the Fat Possum label pay tribute to the late Junior Kimbrough the first artist to record for Fat Possum. Kimbrough was friend of the late R.L. Burnside – another Fat Possum label mate who sadly passed away earlier this year. The Keys stripped down drum and guitar sound pay homage to this North Mississippi Hill Country sound that seems to finally be finding it’s place alongside much of the more famed blues locales and sounds. I also played the brief phone message from Kimbrough’s wife that thanks the Keys for doing such a fine tribute to late husband – nice addition.

Download: Meet Me in the City by the Black Keys.

For a full list of what I played, see Casa de Country Mike.