Actually two highlights from tonights show one of which was following on from Bob’s awesome 45 minute review of the Uncle Tupelo/Wilco/Son Volt ouvre. I added a track by Tweedy’s side project Loose Fur into that mix and a couple of rarities from Uncle Tupelo (I Wanna Destroy You – Gun 7″) and a live Wilco that I got off the net. Bob had done his research and was filling in the history of the bands as he went along.

The song that really made an impression on me from tonight though was something that I’d only just listened to about an hour before going on air by a band called The Old Ceremony. 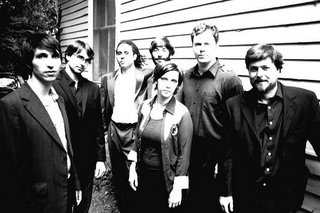 Self described as “a pop-noir musical association from Chapel Hill, North Carolina figureheaded by songwriter/raconteur Django Haskins” the song was called “Blood and Oil”. Lyrically reminiscient of a Nick Cave or Tom Waits composition it was a little out of the theme of my show but sufficiently Americana to warrant inspection. You can grab a copy of Blood and Oil from here.

Playlist for tonights show is posted on my blog, Casa de Country Mike.