Xmas on the Beach

Well after two of the Beach DJs being instrumental in saving the Waiheke Santa Parade from the apathy of Auckland City the thing went ahead on Saturday in all it’s island glory with more floats than it’s ever had and a good spectator turnout. Even despite the torrential rain that made the route back up Oneroa Village quite a battle against the forces of nature for both viewers and participants, the word on the street has been that it was one of the best parades in recent memory. So congrats to all those who put in the hard yard to get the thing back (you know who you are) and for all the Waihekians to turned out to watch. 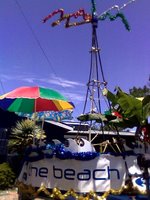 bamboo transmission tower ala Gilligans Isle on the back of Barry’s trailer, surrounded by a banana tree and a couple of beach umbrellas, plus the usual DJs in their festive kiwi Xmas garb. We handed out the usual CD singles to the kids and blasted the Beach and generally a good time was had by all. Bit dissapointed to not win in any of the categories that were proferred up this year, but in effect I reckon a pat on the back for the Beach crew in making sure that the thing was still around anyways and for creating the most appropriately themed float in the parade. 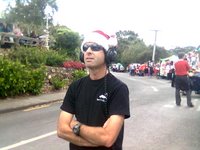 Pre-parade meditations – getting in the zone. 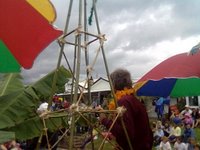 The weather started getting rough…

There’s a few more pics of the Beach float, here.